In Part 12, I summarized how to use the consistency check command (DBCC CHECKDB) to repair a database that has encountered inconsistencies.

In this article, I will try to summarize the contents related to memory management of SQL Server.

The SQL Server process has dynamic memory enabled by default, which means that it allocates as much memory as it can use to maximize performance and releases it as needed.

In a server with SQL Server installed, the SQL Server process generally uses a lot of memory, but this behavior is normal.

For this reason, it's a good idea to collect the baseline of the memory area used by processes other than SQL Server using a performance counter, etc., and set the value of 'max server memory (MB)' to the value below.

Therefore, if a large amount of memory is consumed by a process other than SQL Server, the memory of SQL Server available will be lack and then some errors related to out-of-memory below may occur.
Error 701 : 'Insufficient system memory in resource pool '%1! '
Error 802 : 'Insufficient memory available in buffer pool.'

For this reason, I think it would be a good idea to explicitly specify 'min server memory (MB)'. For example, set it to 1024 MB, which listed in the SQL Server hardware requirements to reserve the minimum amount of memory for SQL Server process.

About the memory that can be controlled by max server memory

Since SQL Server 2012, the architecture of memory management has changed drastically, increasing the memory area that can be controlled by 'max server memory (MB)'. 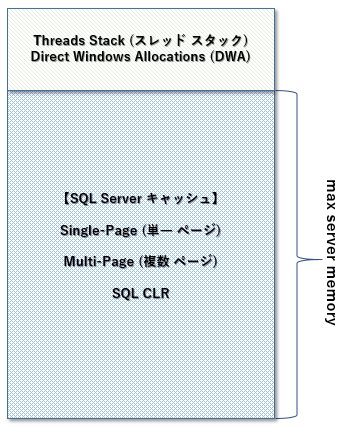 Memory that can be controlled by max server memory (details)

Memory that cannot be controlled by max server memory (details)

In this article, I have summarized the contents related to memory management of SQL Server.

Note that these settings can be changed to take effect immediately without restarting a SQL Server service after installation.